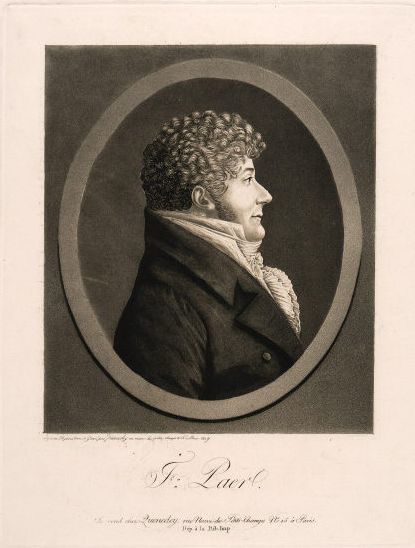 The first performance in Parma and the success of Agnese


During the summer of 1809, benefiting from the months of leave established by his contract with the imperial court in Paris, Ferdinando Paer left for Parma, to visit his mother. Among the many expressions of affection and admiration by his fellow citizens, he also was invited by Count Fabio Scotti to compose a new opera for the opening of the new private theater the Count had built in his villa at Ponte Dattaro, outside Parma.

The opera was Agnese, on a libretto by Luigi Buonavoglia based on Amalia Opie’s novel The Father and the Daughter (1801), adapted for Italian scenes in 1802 by Filippo Casari. Paer composed it in a very short time – the «Allgemeine musikalische Zeitung» writes in just three weeks – for a small company of amateurs, belonging to the Parma aristocracy. Paer himself, an excellent singer, was supposed to go on stage to play the role of Uberto. The composer wrote the bass-baritone part of Uberto for himself, but he could not sing it at the premiere because he had be back in Paris, to fulfill his court duties as director and composer of Napoleon’s private music. Finally, on October 3, 1809, when Paer was already back in France, Agnese was very successfully staged for the first time at the Teatro Scotti.

The peculiarity of the subject, exploiting the theme of folly and that of father-daughter love, makes Agnese highly dramatic in content. It anticipates a successful 19th-century genre in musical theater which includes among others Rossini’s La gazza ladra. Moreover, the fortune of folly as a theme in 19th-century Italian opera is well known as it developed in the footsteps of Paisiello’s Nina and later elaborated by Bellini’s Il pirata, I puritani and Donizetti’s Lucia di Lammermoor. Unusually, however, in Agnese it is not the soprano to be insane, but rather the father Uberto (the bass), who loses his mind as he believes his daughter Agnese to be dead.

Agnese was undoubtedly the most successful and popular opera by Paer, even more than Camilla (1799), Sargino (1803) and Leonora (1804), which were only performed until 1830, and mostly in German and Italian theaters. Agnese, on the contrary, was staged in the major theaters across the world up until 1840 (at La Scala in Milan, in September 1814, in the presence of the author himself, the opera was hugely acclaimed, and repeated more than fifty times surpassing Mozart’s Don Giovanni that appeared in the same Milanese season). Agnese was also performed in Germany, Austria, in London (1817), in Paris (1819), in Warsaw (1830), where the young Chopin found it impressive, then so in Moscow, St. Petersburg, Santiago de Chile and Mexico City. Even the numerous reviews of the 19th-century criticism and the endless quantity of sources scattered throughout the world testify to its international success and circulation.

Particularly interesting are the Parisian performances of Agnese around 1820. At the Théâtre Italien in Paris, one of the most prestigious Italian opera theaters in the world, Paer himself oversaw his productions as theater music director. On July 24, 1819, the Parisian première took place. The evening was memorable and successful. For the occasion some of the major singers of the time were recruited: Joséphine Mainvielle-Fodor, playing Agnese, the tenor Marco Bordogni, in the role of Ernesto, and above all the bass Felice Pellegrini, who sang the role of Uberto. At the Théâtre Italien, while Paer was its musical director, Agnese was performed again in 1820-21 and in January 1824: even this last performance was quite an event, because of the participation of Giuditta Pasta, who on that occasion had her debut at the Théâtre Italien in the role of Agnese. The Parisian criticism unanimously recognized the excellent dramatic balance of the plot and the excellent craftsmanship and intense expressiveness of the music. The only reservations of the critics concerned the opportunity to stage Uberto’s fits of madness so realistically as to arouse, in their view, horror and disgust among the most sensitive in the audience. Significant, in this sense, was what Stendhal wrote in his Vie de Rossini:
L’ Agnese ne me paraît pas du même rang [de Griselda et Sargino]; elle doit son succès européen à la facilité qu’il y a d’imiter d’une manière effrayante les fous, que personne ne se soucie d’aller étudier avec trop de détails dans les retraites affreuses où les place la pitié publique. L’âme ébranlée par le spectacle horrible d’un père devenu fou parce que sa fille l’a abandonné, s’ouvre facilement aux impressions de la musique. […] Ce succès ne m’empêche pas de croire que les beaux-arts ne doivent jamais s’emparer des sujets horribles. […] rien ne rend supportable pour moi l’état affreux où se trouve le père de l’Agnese. La musique centuplant ma sensibilité, me rend cette scène horrible tout à fait insupportable. L’Agnese fait pour moi souvenir désagréable, et d’autant plus désagréable que le sujet est plus vrai. C’est comme la mort: on fera toujours peur aux hommes en leur parlant de la mort; mais leur en parler sera toujours une sottise ou un calcul de prêtre. Puisque la mort est inévitable, oublions-la.
In sum, Agnese was such a great success in those years as to exert a lasting influence on the next generation of opera composers and, more generally by attracting the attention of the most influential critics and musicians of the time, among most illustrious Castil-Blaze, Fétis and Berlioz.

For the performances at the Théâtre Italien of the early 20’s, Paer reworked the opera by introducing a few new pieces in Act II, aiming at improving its dramatic effectiveness. This new music, hitherto unknown, has now re-emerged thanks to research conducted by the present writer. Composed while Rossini was harvesting his greatest successes, it is extremely interesting as Agnese shows the stylistic renewal of Paer under the influence of Rossini’s masterpieces. In particular, the new aria «Da te solo, o Ciel clemente» written for Joséphine Mainvielle-Fodor (1819) and the new duet «L’amato padre mio» composed for Giuditta Pasta (1824), not only are of highest quality but also possess the shape, the orchestral brilliance and most of all the dramatic grip to be found in the homologous pieces by Rossini.